skip to main | skip to sidebar

NEW DELHI: The Supreme Court on Tuesday reserved its orders in the Divine Retreat Centre case.

A Bench comprising Justice S H Kapadia and Justice B Sudershan Reddy heard at length the submissions of senior counsel P P Rao and G Prakash for the State of Kerala. Anil Diwan and Romy Chacko presented their case for the petitioners from Divine Retreat Centre.

The Divine Retreat Centre averred that it was established and managed by Vincentian Congregation and that it is the largest Retreat Centre in the world. Since 1990, over 10 million pilgrims from all over the world has attended retreats there and about 3,500 people are living permanently at the centre.

The organization is currently running a retreat centre at Muringoor, Thrissur, Kerala. The petitioner contended that an anonymous letter was written to the High Court based on which the High Court ordered an investigation without affording them an opportunity to present their case.

The High Court also said that the state government should investigate everything, including foreign exchange issues. The petitioners stated during the course of the hearings that the FIR named 10 persons and out of them, eight are only the helpers.

The Bench has tagged the petition filed by one Jomon Jose on the same issue and allowed him as an intervener. Jomon sought intervention of the Apex Court to set in motion the competent authorities to regulate and prohibit the alleged irregular and illegal activities carried out at the petitioner’s Centre.

The Bench directed the parties to file their written submissions within a week. 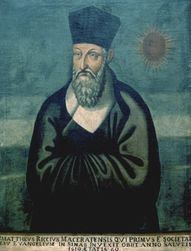 Chinese calendar has been in continuous use for centuries, which predates the International Calendar (based on the Gregorian Calendar) we use at the present day which goes back only some 425 years. The calendar measures time, from short durations of minutes and hours, to intervals of time measured in months, years and centuries, entirely based on the astronomical observations of the movement of the Sun, Moon and stars.

The Chinese are very conscious of their culture and it so happened that in the year 2005, the Ash Wednesday was shifted to the following Sunday by His Grace the Archbishop of Singapore.

Now, let us read about the Man who Came from West who introduced Christianity to this great Nation of China in a form that they could understand.

Italian missionary to , born of a noble family at Macerata in the March of Ancona on the 7th of October 1552. After some education at a Jesuit college in his native town he went to study law at , where in 1571, in opposition to his father's wishes, he joined the Society of Jesus.

In 1577 Ricci and other students offered themselves for the East Indian missions. Ricci, without visiting his family to take leave, proceeded to . They arrived at in September 1578. After four years spent in , Ricci was summoned to the task of opening to evangelization.

Several fruitless attempts had been made by St. Francis Xavier, and since his death, to introduce the Church into A house of the Jesuits had already been set up at in 1571 but their attention was then occupied with . After various disappointments they found access to Chow-king-fu on the Si-Kiang or West River of Canton, where the viceroy of the two provinces of Kwang-tung and Kwang-si then had his residence, and by his favor were able to establish themselves there for some years.

Their proceedings were very cautious and tentative; they excited the curiosity and interest of even the more intelligent Chinese by their clocks, their globes and maps, their books of European engravings, and by Ricci's knowledge of mathematics, including dialling and the projection of maps. They conciliated some influential friends, and their reputation spread widely in . It was during these days that they decided to adopt the costumes of Chinese literates, and, in fact, they before long adopted Chinese manners altogether.

Chang-chow, as a station, did not prove a happy selection, but it was not until 1595 that an opportunity occurred of travelling northward. For some time Ricci's residence was at Nan-chang-fu, the capital of Kiang-si; but in 1598 he was able to proceed under favorable conditions to Nan-king, and from there for the first time to , which had all along been the goal of his missionary ambition. But circumstances were not then propitious, and the party had to return to Nan-king. The fame of the presents which they carried had, however, reached the court, and the Jesuits were summoned north again, and on the 24th of January 1601 they entered the capital. Wan-li, the emperor of the Ming dynasty, in those days lived in seclusion, and saw no one but his women and the eunuchs. But the missionairies were summoned to the palace; their presents were immensely admired, and the emperor had the curiosity to send for portraits of the fathers themselves.

They obtained a settlement, with an allowance for subsistence, in , and from this time to the end of his life Ricci's estimation among the Chinese was constantly increasing, as was at the same time the amount of his labors. Visitors thronged the mission house incessantly; and inquiries came to him from all parts of the empire respecting the doctrines which he taught, or the numerous Chinese publications which he issued. This in itself was a great burden, as Chinese composition, if wrong impressions are to be avoided, demands extreme care and accuracy. As head of the mission, which now had four stations in , he also devoted much time to answering the letters of the priests under him, a matter on which he spared no pains or detail. New converts had to be attended to -- always welcomed, and never hustled away. Besides these came the composition of his Chinese books, the teaching of his people and the maintenance of the record of the mission history which had been enjoined upon him by the general of the order, and which he kept well up to date. Thus his labors were wearing and incessant. In May 1610 he broke down, and after an illness of eight days died on the 11th of that month. His colleague Pantoja applied to the emperor for a burying-place outside the city. This was granted, with the most honorable official testimonies to the reputation and character of Ricci; and a large building in the neighborhood of the city was at the same time bestowed upon the mission for their residence.

Ricci's work was the foundation of the subsequent success attained by the Roman Catholic Church in .

Probably no European name of past centuries is so well known in as that of Li-ma-ku, the form in which the name of Ricci (Ri-cci Mat-teo) was adapted to Chinese usage, and by which he appears in Chinese records. The works which he composed in Chinese are numerous. In the early part of his residence at Peking, when enjoying constant intercourse with scholars of high position, Ricci brought out the T'ien-chu shih-i, or "Veritable Doctrine of the Lord of Heaven", which deals with the divine character and attributes under eight heads. "This work", says A. Wylie, "contains some acute reasomng in support of the propositions laid down, but the doctrine of faith in Christ is very slightly touched upon. The teachings of Buddhism are vigorously attacked, whilst the author tries to draw a parallel between Christianity and the teachings of the Chinese literati."

Among the scientific works which Ricci took into China was a set of maps, which at first created great interest, but afterwards disgust when the Chinese came to perceive the insignificant place assigned to the "Middle Kingdom", thrust, as it seemed, into a corner, instead of being set in the center of the world like the gem in a ring. Ricci, seeing their dissatisfaction, set about constructing a map of the hemisphere on a great scale, so adjusted that , with its subject states, filled the central area, and, without deviating from truth of projection, occupied a large space in proportion to the other kingdoms gathered around it. All the names were then entered in Chinese calligraphy. This map obtained immense favor, and was immediately engraved at the expense of the viceroy and widely circulated.